The images below show multi model ensemble probability forecasts for February to April 2021, for surface temperature and precipitation.

Over Alaska and western Canada, global climate models are mostly indecisive (white color on the figure below) which means that any of the three probability categories can occur over this region. There are two exception over this region, southern and the northern coastal zones, where climate models predict at least 40% probability for below or above normal temperatures for FMA respectively. Over central and eastern Canada, FMA season will be above normal with somewhat low probabilities of at least 50%. Central parts of the Canadian archipelago have at least 60% probability for above normal FMA.

Western Nordic region is split between below normal probabilities (40-50% and higher) at the southern parts and above normal probabilities (at least 40%) at the northern parts of the sector. Central parts of this region, such as Iceland, have equal-chance expectations for all three probabilistic categories. Eastern Nordic region have at least 40% chance for above normal FMA, while the southern parts of the region (i.e. Baltic Sea) have even higher expectation (50% and more).

Western Siberia also has above normal temperature expectations with at least 40% chance at the northern and central parts. These probabilities rise to a 50% or more at the regions’ southern frontiers. Western Siberia, Chukchi and Bering regions are dominated by above normal temperature forecasts of at least 50% probabilities. These probabilities are reaching values of 60% and more over some isolated regions of western Chukchi and Bearing region. 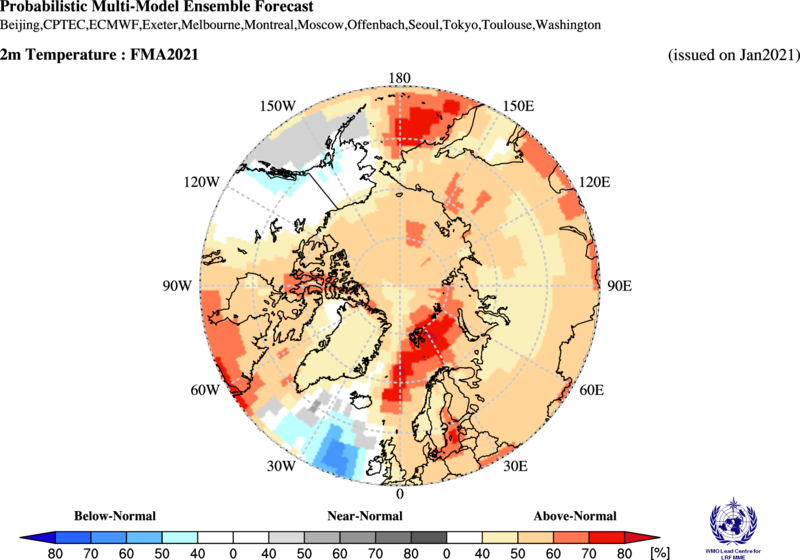 Over the largest part of the Arctic region, there are expectances to have above normal precipitation for the second part of the winter FMA21. Over most of the Alaskan and western Canadian Arctic, these expectances are rather week (40% or more).
Western Nordic region has mostly equal precipitation chance with an exception of the western parts having at least 40% chances for below normal precipitation. Similarly, over the eastern Nordic region, equal chances are expected everywhere with an exception of the Baltic Sea, where above normal probabilities of 40% or higher are expected. 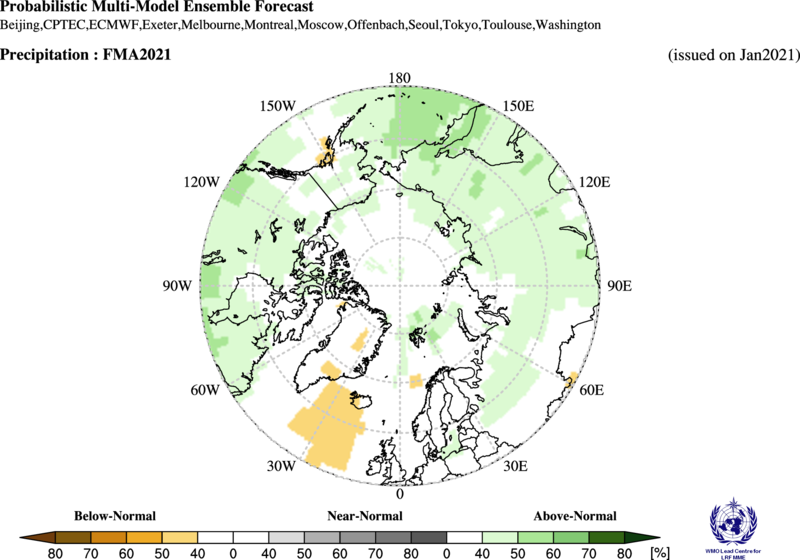