This is the main result from the climate summary stated in the ACF-4 Consensus statement, for temperature and precipitation during June, July and August 2019, and and sea ice during September 2019. View the full climate summary presentation for more details. A strong persistent high-pressure system over the Arctic region between June and August 2019 contributed to the above normal surface air temperature and near-record low sea ice extent observed in the region. Above normal temperatures and drier-than-average conditions are forecast for all Arctic regions between November 2019 and December 2020, contributing to later-than-normal freeze-up and normal to below-normal sea ice extent forecast this winter.

The figure shows June, July and August (JJA) 2019 temperature anomaly relative to the 1961-1990 reference period, based on the NCEP/NCAR Reanalysis.The average surface air temperatures in the Arctic north of 65°N was above normal (red areas) in most regions, with the exception of north central Canada and the northwestern part of Russia. Eastern Siberia saw their warmest JJA since the start of the record in 1936, while most of the Chukchi, Central Arctic, and Alaskan regions saw their second warmest JJA on record. Using data from NCEP/NCAR reanalysis to rank the average surface air temperature, the JJA period ranged from the top 10 warmest over parts of Alaska, Chukchi, the northern Canadian Arctic, and most of Eastern Siberia, to the 10th coldest in small areas of the western Canadian Arctic and northwestern Russia regions since the start of the record in 1949 (not shown). Click image to see forecast and climate summary side by side. Temperature summary for the same period.

The figure shows June, July and August (JJA) 2019 precipitation anomaly relative to the 1961-1990 reference period, based on the NCEP/NCAR Reanalysis. Drier than average conditions were observed during the summer 2019 across the majority of Eastern and Western Siberia, the central Arctic region, and Greenland in the Atlantic region (orange areas). On the other hand, the majority of the Canadian Arctic experienced near-record wetter than average conditions (green areas). Click image to see forecast and climate summary side by side. Precipitation summary for the same period.

The figures shows the blended Arctic ice chart (AARI, CIS, NIC) for 16-19 September 2019 and ice edge occurences for 16-20 September for 1999-2018, where the top figure is the total concentration, and the bottom figure is the predominant stage of development. Minimum sea-ice extent, volume and thickness is normally reached each year in the Arctic during the month of September. The 4.10 mln km2 minimum sea-ice extent reached on September 17, 2019 is the 2nd lowest minimum sea-ice extent since 1979, tied with 2016 and 2007 with the 1st lowest (3.35 mln km2) in 2012. Estimates for sea-ice volume, based on numerical reanalysis (HYCOM-CICE, PIOMAS), show considerable decrease in sea ice volume by September 2019 (4.06 km3) in comparison to previous years (5.09 km3 in 2018). That could be also the 2nd minimum since 1979 (1st in row 3.79 km3 estimated for 2012). That is somewhat opposite to spring 2019 conditions when observations from coastal stations showed maximum winter ice thicknesses just slightly less than normal for most of the Arctic seas with the exception of the Kara sea which was above normal and the Chukchi Sea region which was significantly below normal. Precursors for much lower sea ice thicknesses in the Arctic are predominance of extreme positive air temperature anomalies and lower precipitation amounts observed during the sea-ice melt season. 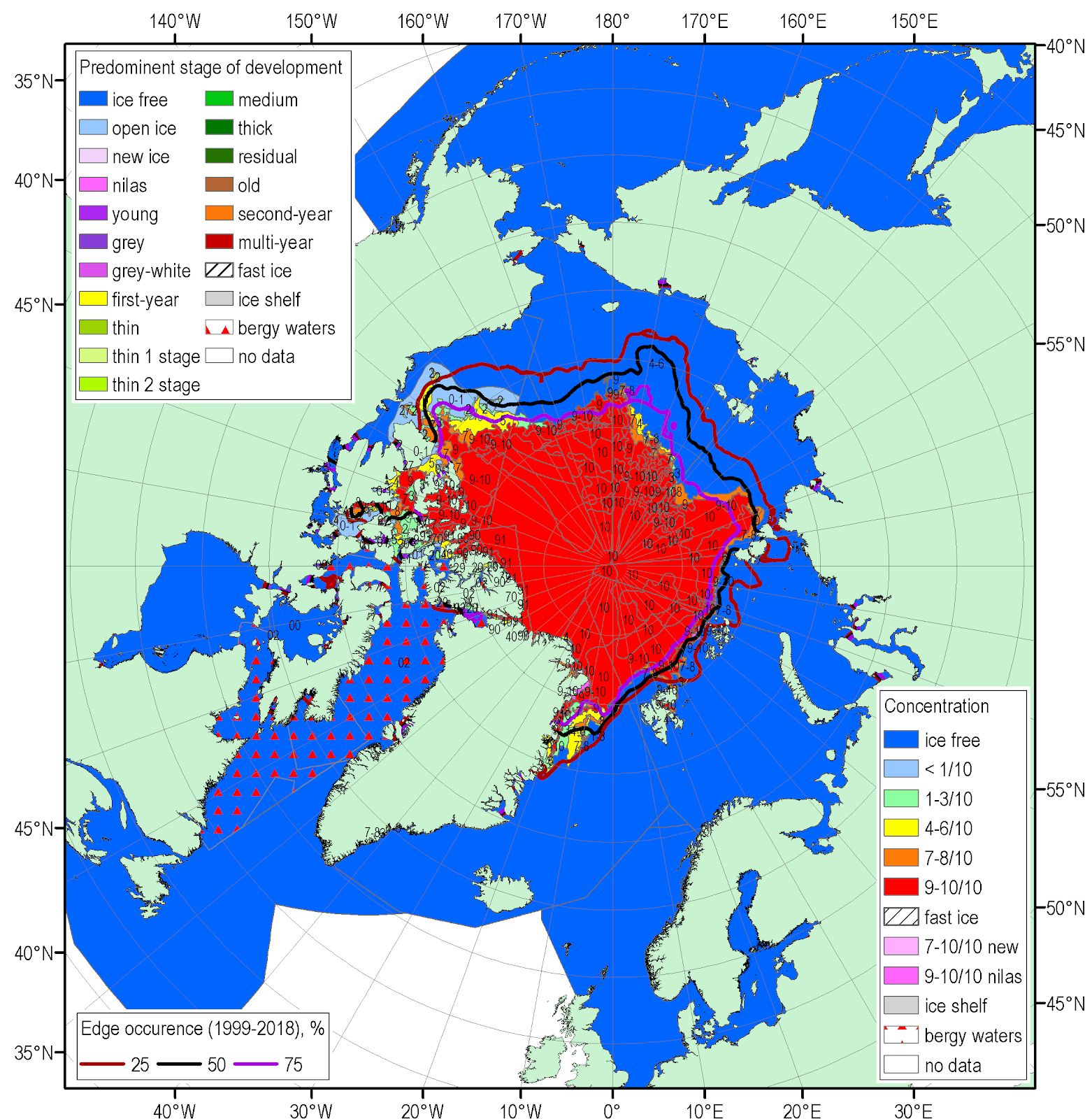 No long-range forecast for sea ice for this period.